​      An old Spanish proverb states, “a thief who steals from a thief is pardoned for a hundred years”. This is a perfect expression when it comes to land ownership/occupation in Texas and the United States in general. However, for the purpose of this essay I will mainly focus on my home state of Texas. Also, to provide full disclosure, I must state that I am not a native born Texan. I was born in Camp Lejeune North Carolina; my father was a Marine at the time. He, like some of my uncles, served in Vietnam. Nevertheless, our family on both my mother and father’s side was from the South Texas region known as the Rio Grande Valley. So my roots are Texan, specifically border Texan.
Living in the Rio Grande Valley has provided me with an interesting outlook of the world, much like all of us are shaped by our hometown environment. I went to the school in the 80’s and was a product of an ethnocentric history that promoted the idea of a barbaric frontier filled with people who did not believe in land ownership and were in no way civilized. Furthermore, settlers under the great Stephen F. Austin came to Texas in hopes of finding land in which they could live peacefully, but they rebelled under the yoke of Mexican oppression. The fight they undertook was for freedom, democracy, good versus evil. Much like the old Westerns that I watched in my childhood, things were black and white. The white hats were the good guys and the black the bad guys. There was no in between, no nuanced view. It was good versus evil and good triumphed. The period following Texas Independence and the state’s subsequent annexation was followed by the taming of Texas, primarily done by the greatest law enforcement agency in history, the Texas Rangers. These men were knights with hats, who defended the great state of Texas against bandidos, Indians, and outlaws. Their mythic tales are still told, sung, and filmed to this day.
“A thief who steals from a thief”. So, who are the thieves of which I speak? The first group were the Spaniards, the original thieves. Perhaps the greatest case of land theft in history began in 1492, when Christopher Columbus sailed the ocean blue. In his journal Columbus wrote,
These words, “they can all be subjugated”, immediately positions Columbus, his men, the King and Queen of Spain as being some of the greatest thieves, thieves of life, liberty, and property. Those inalienable rights posited by John Locke that we as Americans hold so dear, were deprived, “stolen” from the Native Americans.
The thievery that began in 1492 continued on throughout the Americas, taking, killing, enslaving the natives of the Americas. However, for the purpose of this essay I will focus on the land that would become the state of Texas. Texas, like all the southwest and beyond, was an area populated by different tribes, cultures, and most importantly civilizations. Civilization is the most important aspect to examine, because it was under the guise of bringing civilization to the barbarians that philosophies such as Manifest Destiny were used to justify theft of life, land and property. As a world history teacher, I teach my students that the elements of civilization are political structure, religion, some sort of economy, art, and a division of labor, all of which can be found in any of the indigenous people of the Americas. It may not have been seen this way through an Anglo-Eurocentric lens but civilization did exist for sympathetic Spaniards such as De Las Casas. Yet, it was the lack of perceived civilization that led to the theft of Native land. Consequently, the Spanish and later the Mexican government became the first thieves. Thus, expeditions like that of Escandon who settled and created towns along the Rio Grande, were in a sense sitting upon previously occupied land which they had to fight to keep. In time, the land’s occupation would go from the Spanish government to the Mexican government. Then came Manifest Destiny in the guise of Stephen F. Austin.
Perhaps nothing else embodies the heart of Manifest Destiny like John Gast’s painting, “American Progress”. This image works so well that many educators such as myself utilize it in our classrooms to help our students understand the mindset of Manifest Destiny. In the image you see contrasting light to dark landscapes, the light following behind the image of Lady Liberty bringing knowledge in one hand represented by a book, and technology in the other in the form of a telegraph wire. In the dark half of the image you see fleeing Native Americans from the light and progress of American people and industry. It is obvious to anyone who sees it that it demonstrates the idea that the United States brought civilization to the uncivilized. Highlighting the fact that America was indeed the “city upon a hill” that would be the example of progress and civilization to the world. These were the guiding principles that led Anglo-American people spread further west into Spanish territory like that of Texas. 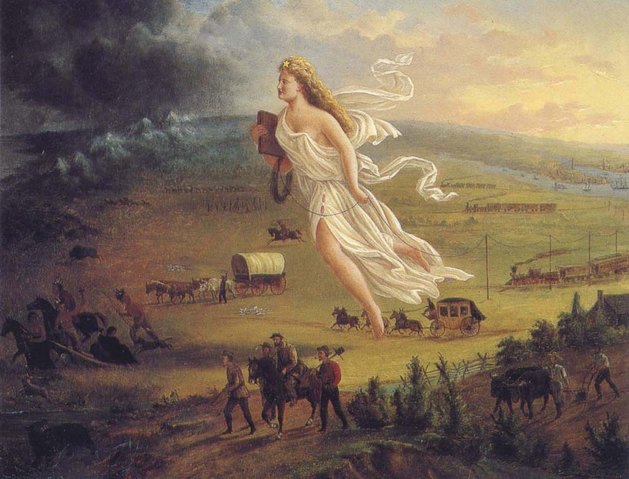 Austin’s group was allowed to settle in Texas as part of a Spanish policy to hold on to the land and prevent encroachment by other European powers and control the Native American population. The Native Americans were a constant threat in the Northern stretches to the Spanish Empire. The Mexican government would continue this policy in order to maintain control of their newly won independent nation. Austin and his people were supposed to be good Mexican citizens and become part of Mexican society. However, this was not to be the case especially when it came to the outlawing of slavery. Nonetheless, I posit that they would have eventually rebelled due to the fact that they saw their people, their culture, their government as far superior to that of the Mexicans. Stephen F. Austin stated:
Austin’s reference to the West is really the United States of America and it is a vague reference to the annexation which came after the Texas War for Independence. Austin’s use of “benighted regions” aligns itself with the philosophy of America’s Manifest Destiny that promotes an image of a great people bringing light into the darkness, the darkness being the uncivilized non-whites, be it Mexicans or Native Americans; for neither were members of the Anglo-Saxon race who came to save the continent from barbarism. This theme would pervade Texas history long into the 20th Century.
This philosophy would carry the United States into the Mexican American War that would result in the acquisition of half of Mexico’s northern territory. However, despite of the United States victory over Mexico, South Texas was still heavily populated and controlled by Mexicans. Mexicans who were now considered citizens of the United States under the Treaty of Guadalupe Hidalgo. South Texas in the late 1800’s on into the early 1900’s was mostly ranch land, and that land was held mostly by Mexican families who had land grants sometimes dating back to the time of Spanish occupation. In time after the Mexican American War, Anglos began to make their way into the South Texas border region known as the Rio Grande Valley. The Valley was the last real bastion of Mexican land ownership and, to some extent, political power. Through means such as intermarriage and in time lean cattle markets led to tax sales. Some Anglos began to acquire tracts of land from Mexican owners. They sought to bring modern technology such as irrigation and the railroad into the Valley to exploit their newly acquired lands for profit which led to a mass immigration of Anglo ranchers from the Midwest into the Valley.
The influx of Anglos and the need for more land that was owned by Mexicans led to racialized violence along the border, much of which was perpetrated by the infamous “rinches” or the Texas Rangers. It was through the use of the Rangers and vigilante groups that followed suit in this frenzy of violence upon Mexicans and Mexican Americans, which solidified Anglo dominance in the region up until the 1970’s. These same Rangers have been glorified in our history books, hearts and minds as those who settled into Texas and made it a peaceful place to live. They, along with Stephen F. Austin who once described Mexicans as “a mongrel Spanish-Indian Negro race who [waged war] against civilization and the Anglo race “, William Travis, Sam Houston, and a long pantheon of Texas heroes were the thieves that have been pardoned for 100 years. They successfully stole the land from the previous thieves who had stolen it from the Native tribes in the area. Thus pardoned, they were allowed to be glorified and their crimes erased from the collective conscious of those who came afterwards and needed to have their hands washed from the blood that had been spilt.
Now, I understand that it may be a difficult thing to grasp that neither side was clean, but the so called “black legend” lives on in the history books of our times. America as a nation is able to accept this part of the story but yet finds its crimes difficult to swallow, and therefore, refuses to see it on its dinner plate. The perpetrators, in their minds, have been pardoned by the glorious civilization that they have created in the United States: technological advances, great military victories, and artistry. Yet, none of this would have been possible if not for the participation of those that remained and continue to exist in the land they have always called home. From the Native Americans and Mexicans, we are still here, and this is still our home. Most importantly, the hundred years are up.
​
Bibliography
Austin, Stephen F. 2009. qtd. in The Spanish Frontier by David Weber. New Haven: Yale University Press.