The Hustler: Trump and the Mean Streets of East Los Angeles
by Álvaro Huerta, Ph.D. 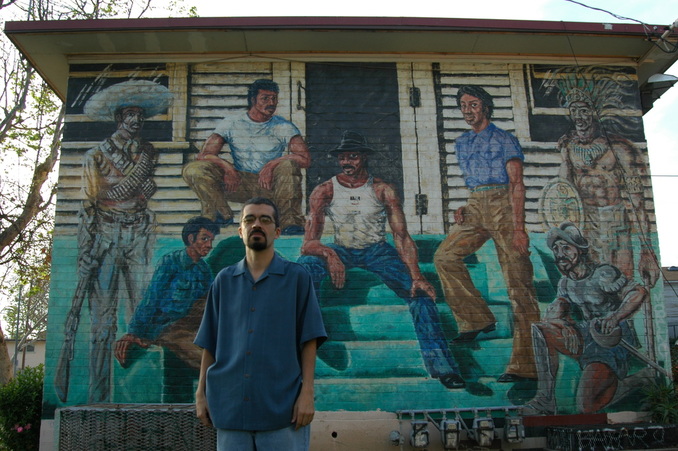 ​On the first day of class, I always inform my university students that I hold two PhDs. One from a premier research institution, UC Berkeley, and the other from one of the toughest neighborhoods in the country, East Los Angeles’ Ramona Gardens housing project or Big Hazard projects (named after the notorious gang). While I’ve relied on my research and analytic skills to criticize Donald Trump, as the Republican presidential nominee, I’ve also depended on my street smarts to deconstruct his extremist politics and erratic behavior. While political foes, pundits, cable news anchors and journalists are bewildered by Trump, I grew up with his type: wannabe tough guy, bully and hustler. To deal with Trump, we must view him through these typologies, among others, such as xenophobe, racist, money-grubber and liar.

Apart from many great and loyal childhood friends, I also grew up with real tough guys. Thus, if debating Trump, I would launch a similar verbal attack that Sen. Lloyd Bentsen (D-TX) used to demolish then-Sen. Dan Quale (R-IND) in the 1988 vice-presidential debate: “Trump, I grew up with tough guys. I knew tough guys. Tough guys were friends of mine. Trump, you're no tough guy.”

It’s amazing to me that Trump gets away with a tough guy persona, boasting about punching protestors in the face, killing the families of terrorists, waterboarding suspected terrorists and invoking guns and bombs (including nukes!) to resolve domestic and international conflicts. This is the same guy who secured five deferments to avoid the Vietnam War, according to the New York Times (August 1, 2016). Has Trump ever experienced a situation involving guns? Growing up in the projects, I witnessed and experienced many deadly and precarious situations. Apart from witnessing a fatal shooting of a young Chicano, for instance, while learning how to drive, as a 16-year-old, a cop pointed a gun directly at me. My crime? I failed to make a complete stop.

To prove his toughness, I invite Trump to my old barrio—without private bodyguards, Secret Service agents and local police—to reassert his claim that Mexican immigrants constitute “drug dealers,” “criminals” and “rapists.” If he can’t repeat these racist generalizations directly to the people he’s attacking, he’s a coward. Similarly, during his recent trip to Mexico, why didn’t “super macho” Trump directly demand that Mexican President Enrique Peña Nieto pay for his absurd wall?

Moreover, by viscously attacking Mexican immigrants, one of the most vulnerable groups in this country, Trump has cemented his bully credentials. Like the bullies roaming our schools, neighborhoods, parks and Congress, Trump preys on individuals who can’t defend themselves. He behaves like a 6th grader who insults 3rd graders and takes their lunch money. By supporting Trump, millions of Americans only legitimize his brutish and infantile behavior both domestically and internationally, reaffirming to the world the “Ugly American” reputation.

Furthermore, Trump is a hustler. While the term “hustle” has positive and negative connotations on the streets, as it pertains to people like Trump, it refers to individuals who take advantage of others for personal gains. We had a few of them in the projects. For example, I was hustled a few times by lending money to childhood friends who never paid back. On one memorable occasion, a hustler sold my sister a car battery that he had stolen from her red Nissan. (Fortunately, he gave her a discount.) Eventually, these individuals secure bad reputations, where they, like Trump, can’t be trusted.

In terms of his business reputation, for example, in addition to the lawsuits surrounding Trump University, hasn’t Trump been sued by many individuals / vendors who didn’t receive payment for their services? According to USA Today (June 9, 2016), Trump’s companies have been involved in thousands of lawsuits during the past 30 years, where, on many cases, he or his companies have been accused of not paying bills for services rendered, etc.

Additionally, hustlers will say anything you want to hear to serve their self-interests. They conveniently change their message or tone when it benefits them. Just ask the former members of Trump’s National Hispanic Advisory Council, like Alfonso Aguilar and Jacob Monty, who resigned after listening to Trump’s extremist, anti-immigration speech in Arizona on August 31, 2016. I’m astonished that it took these Latino Republicans so long to learn that Trump was hustling them all along. Essentially, like the black Republican supporters / surrogates in Trump’s corner, these foolish Latinos were used as token brown faces in a mostly white Republican presidential campaign and political party.

At the end of the day, if he becomes the next President of the United States, Trump would have orchestrated one of the biggest hustles in American history.
​