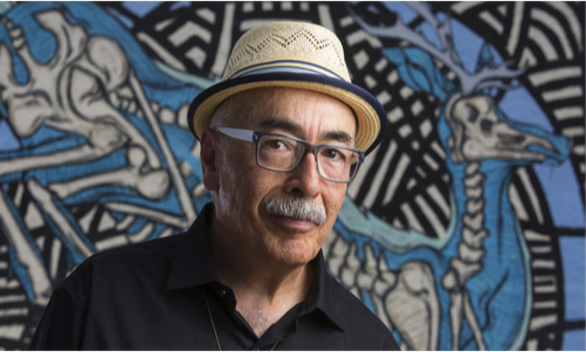 ​When the Library of Congress appointed the first Latino as the U.S. Poet Laureate in 2015, it became a moment of celebration for Latinos all around the country, adding a badge of honor to our community. Juan Felipe Herrera took this honor to heart, as he spent much of his time as Laureate traveling across the country conducting readings, lectures, and workshops with students as well as the general public.

Just as the American literary world gathered for Juan Felipe Herrera's last lecture as U.S. Poet Laureate at the library of Congress, we received the wonderful news of his reappointment for a second term. Once again, our hearts filled with pride knowing that Juan Felipe will continue to spread poetry and culture throughout our country.

In this second term as U.S. Poet Laureate, Juan Felipe seeks to continue expanding his online project, La Casa de Colores, which consists of two parts. One, La Familia, invites members of the general public of all voices and experiences to contribute in the making of an epic collective poem. The second, El Jardin, records the Laureate's explorations and experiences with the curators of the Library of Congress and the Library's wealth of materials.

As Juan Felipe Herrera carries on his journey as our country's Poet Laureate, we wish him the best of success in all his endeavors so that he may continue to bring joy and light to Latino literature around the world.
​
Optimonk subscribers