PADILLA: A lot of us have heard about the discriminatory and straight out racist laws Arizona has enacted this last decade, including a ban on Mexican American Studies. What exactly does this ban mean and what is at stake?
We opened Under Ground Libraries at our stops along the way. The goal is to make sure that our community’s access to its literature is never at the whim of an administration again. We have Librotraficante Under Ground Libraries in Houston, San Antonio, Albuquerque, and Tucson, among other cities, and they are thriving.
In Texas, we thwarted any bills that adopted the same language as the AZ ban.  We also were able to push for more classes and also a call for Ethnic Studies textbooks. That’s a longer story, but the good news is that on June 7, I submitted to the Texas State Board of Education, The Mexican American Studies Toolkit, for which I am the lead writer and editor. That textbook is already available for schools to adopt, but it is also going through the process of approval of adoption state wide.

So here is the irony of our time, as The Librotraficantes ride 1,100 miles to witness the court case that could decimate Ethnic Studies in every state of the union, we are carrying with us the textbook that might spread Mexican American Studies faster than ever.

PADILLA: What has been the response within our community? Have other organizations become allies with the Librotraficante movement? 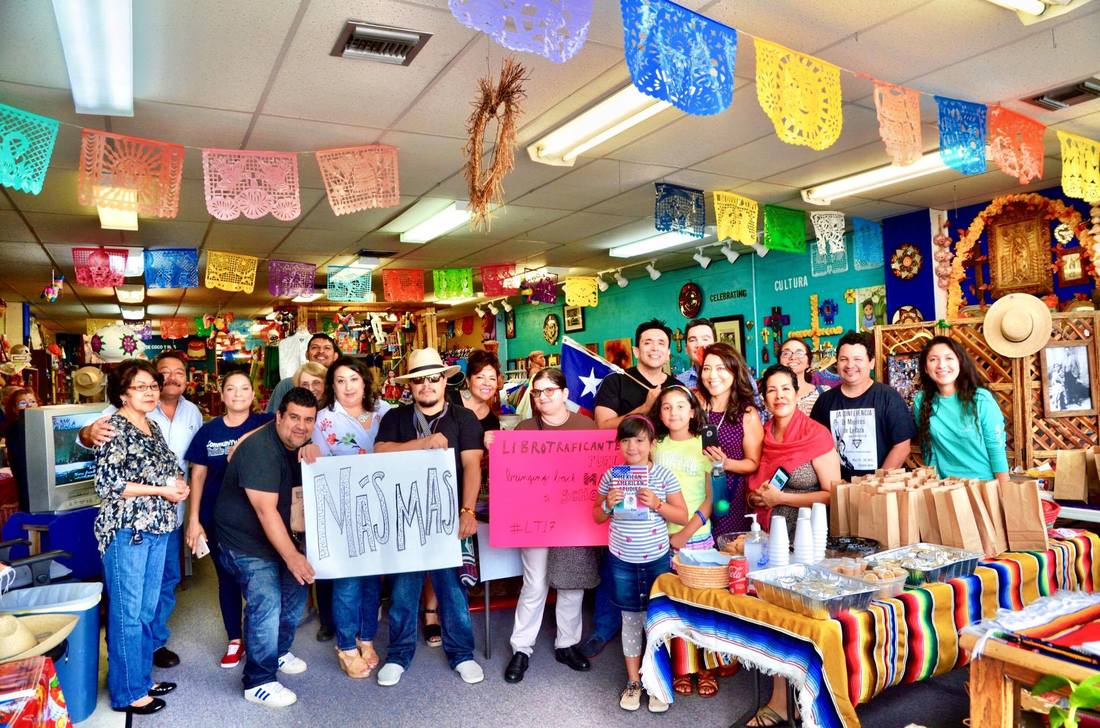 The 2017 Librotraficante Caravan launched from Casa Ramirez folk Art Gallery in Houston, Texas. Photo Credit | Juan Parras.
DIAZ: It is powerful to see the Librotraficante Under Ground Libraries thrive. We revisited and restocked their shelves on the 2017 Caravan. We also have many other allies including Chicana literary icon Denise Chavez, author of “Loving Pedro Infante”, among other works, who hosted a reception for us at her book store and cultural center Casa Camino Real in Las Cruces, New Mexico. She donated books and also organized a community reception. The El Paso community once again organized a powerful reception which included Danza, poets, writers, and community members at Café Mayapan. Book donors include Arte Público Press, Wings Press, Cinco Punto Press, and so many others. The outpouring of support has been powerful and keeps growing. Of course, groups such as The National Association for Chicana and Chicano Studies (NACCS), and the NACCS Tejas Foco have put out statements against the ban, as have non-Latino groups. Most recently Pen America condemned the Arizona MAS ban and called it out as an attack on Freedom of Speech.
Be vigilant. Look for potential laws and policies in your state that are might be copying parts of the Arizona law banning Mexican American Studies and nip it in the bud.

Bolder steps include starting Ethnic Studies classes in the community or as part of classes that already exist. The next step is to push for formal implementation of such classes in an entire school district and/or state wide.

Folks can also go to Tucson for the subsequent parts of the trial.

PADILLA: Where can we find more information regarding any updates about the Librotraficante movement?
DIAZ: It seems that Democracy needs to be rebooted every 50 to 60 years. That duty has fallen on the shoulders of Chicanas, Chicanos, and Latinxs this time around. However, we’ve been prepared for this. What our community used to do to simply survive, will now help us thrive, and together we will overcome this oppression and lead the nation into an era of Enlightenment.

PADILLA: Tony, it was great to have you on Latino Book Review. On behalf of all of us who hold our heritage dearly, thank you for standing up for our literature, our culture and our future generations.

DIAZ: It is a blessing and honor to unite for this great cause. Gracias.
​
Optimonk subscribers