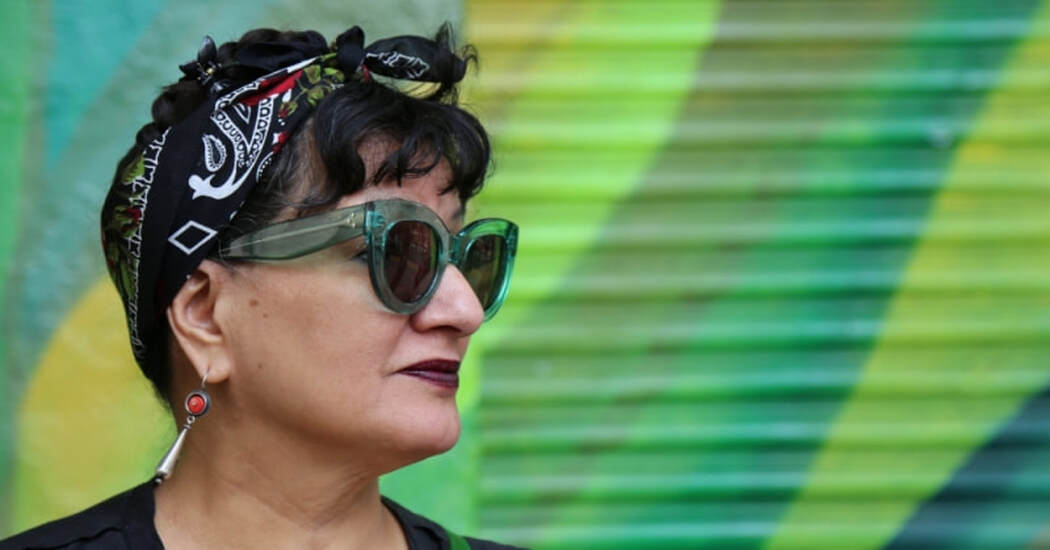 Photo © Macarena Hernandez
​Sandra Cisneros is an activist poet, short story writer, novelist, essayist and artist. Writing for over 50 years, her work explores the lives of the working-class. Her numerous awards include NEA fellowships in both poetry and prose, the Texas Medal of the Arts, a MacArthur Fellowship, several honorary degrees, and both national and international book awards. Most recently, she received the Ford Foundation's Art of Change Fellowship, Chicago's Fifth Star Award, the PEN Center USA Literary Award, the Arthur R. Velasquez Award from the National Museum of Mexican Art in Chicago and Loyola University's Arts & Science Damen Award, presented to Loyola alumni in recognition of their leadership in industry, the community, and service to others. She received the 2015 National Medal of Arts presented to her by President Obama at the White House, she received the Congressional Hispanic Caucus Institute's 2017 CHCI Chair's Award in Washington, D.C., and The Texas Institute of Letters's Lifetime Achievement Award 2018.

Her classic coming-of-age novel, The House on Mango Street has sold over six million copies, has been translated into more than twenty languages, and is required reading in elementary, high school, and university curricula across the U.S.

Founder of awards and foundations, and a dual citizen of Mexico and the Unites States, she currently makes her home in the state of Guanajuato, home of her ancestors.
GERALD PADILLA: Sandra, it is an honor to have you, one of the leading figures of Latino and American contemporary literature, on Latino Book Review.

SANDRA CISNEROS:  It’s kind of you to give me this platform.
I never expected more from my writing career than the good opinion of other writers, so, of course, I’m startled by my life.  I was/am essentially an introvert, but my career demands I meet my public, which is antithetical to writing, but it allows me to do the spiritual work of delivering the stories and poems to those who need to hear them.  What I do on paper and in person I consider work of the spirit.

Sacrifices?  Everybody makes sacrifices.  My father and mother had to work very hard, as did their parents.  I think my life is pretty easy compared to them.  I have to deal with getting on planes when I’m afraid of flying, meeting deadlines, speaking in front of a public, sumo wrestling with my writing, trying to write about subjects that will help right the planet when it’s off its axis, trying to heal people with what I say/write, but all this is within my capacity, and not as difficult as those who came before me.  I think one of the great difficulties of being a writer is that I do things differently from most of society, and that makes them think of me as “eccentric,” but I live by my heart, by my truth, and that makes everyone else look like “eccentrics” to me.

I am a single woman without children living far from family, in another country, who has no intention of living with someone.  Does that make me look crazy?  Maybe to my relatives, but not to artists friends, who understand why I live as I do.

If I had to speak about anything that was difficult in my life now looking back at it, I would say the most difficult part was how the world made you feel about being poor, about being a girl.  And, later, how painful it was navigating the world as a young woman.  A lot of times I found myself in disastrous situations because I was such an innocent/idiot.  It left me damaged as a human being for decades.  I think having been beautiful was a cross, and I’m grateful I’m no longer young and no longer beautiful in that same way.

PADILLA: In the past you’ve mentioned how you didn’t feel “smart enough” as a student, probably because you constantly had to be moving around to different homes and schools as a child. Ironically, your work has become widely studied throughout the American public school system and academia. How does this scholastic acceptance make you feel in reference to how you felt about yourself as a child? And, what would you say to some of our youth who may feel like they are not “smart enough” as students?

CISNEROS: I’ve already written about this in my essay “A Girl Called Daydreamer,” but to sum it up, I was not measured for the greatest gift I was born with, creativity.  I’m lucky I survived to be an artist at all given my first report cards and the attitude of my early teachers.

I think we are all gifted as children, but we aren’t gifted with the same gifts.  In crowded, poor schools, an overwhelmed teacher can’t always help us discover what our gifts are.  I am grateful my mom was a frustrated artist.  At home we drew murals, created puppet shows, had craft hours, went to the library, visited museums. I’m certain without my mom, I wouldn’t have been an artist today.
PADILLA: In 2016, you received the highest award given to artists by the United States government, the 2015 Medal of Arts presented by President Obama at the White House. What went through your mind when you were first given the news regarding this recognition? Was this an outcome that you had hoped for as a writer or was this something unexpected? 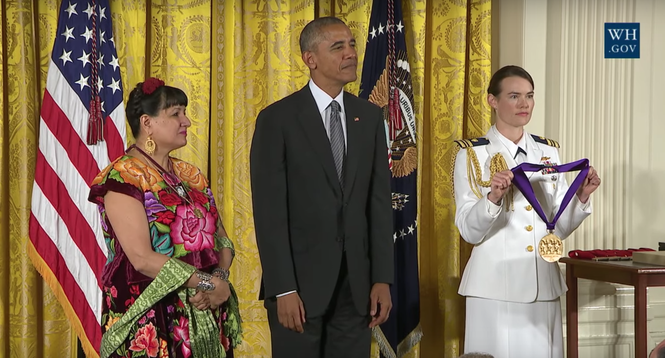 From the archives of whitehouse.gov
CISNEROS: I don’t feel awards are that important TO ME at this level in my career, and I would’ve preferred to stay home writing that day, but I had to go to collect the award to represent my community.  I personally had to wrestle whether to attend because of Obama’s record with the deportation of undocumented immigrants.  I felt and feel conflicted about appearing anywhere with a politician since politicians have more to gain than I do from our encounters.

It is difficult for me to be at any event where I am not allowed to speak.  In order to counter this, when I visited the White House I dressed in my most striking Mexican outfit, so that I could speak through my clothes.

PADILLA: What are some life lessons you’ve learned throughout your journey as a writer that might be helpful to other Latino artists who are starting their journey?
CISNEROS:  What a terrible time we are witnessing for Latinos in the world.  The only good thing that can come from it is if it motivates us to act to do something positive to right the wrongs we witness daily.  We must be so disgusted by what we are witnessing that we rise up and become a hero, even if being a hero means only opening our mouths and speaking.

PADILLA: Sandra, thank you for sharing your journey and vision with us. It was a pleasure to have you on Latino Book Review. De todo corazón, we wish you the best.