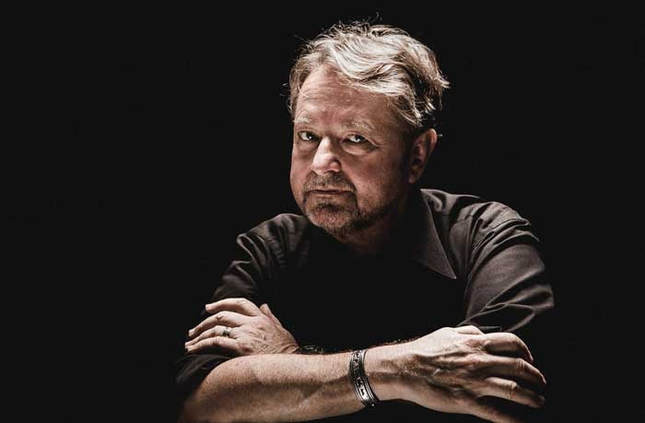 Luis Alberto Urrea (Tijuana, Mexico) is a Pulitzer Prize Finalist for his landmark work of nonfiction The Devil's Highway. He is also the bestselling author of the novels The Hummingbird's Daughter, Into the Beautiful North, and Queen of America, as well as the story collections The Water Museum, a PEN/Faulkner Award finalist. He has won the Lannan Literary Award, an Edgar Award, and a 2017 American Academy of Arts and Letters Award in Literature, among many other honors.

​GERALD PADILLA: Luis Alberto, it’s a pleasure to have you on Latino Book Review and congratulations on your upcoming book, The House of Broken Angels.

LUIS ALBERTO URREA: Thank you so much, mi gente! It means a lot to me to speak with you.
Once they were not happy together, you could have parked a migra truck right in the kitchen. I have often said the kitchen was the US and the living room was pretty much Sinaloa. And that’s when I had to learn some pretty serious spy moves to get through the intrigues of that particular Cold War. And that extended into my general life in the US for a long time.

PADILLA: As a young author, what was some of the most valuable advice you received?

URREA: It was from Rudolfo Anaya. I was a bit in awe of him. But he immediately took on the role of some kind of tio and he told me something I have never forgotten. He said if you can make your abuelita in Tijuana the grandmother of some reader in Iowa, you have committed the most powerful of political and religious acts. I hear that small voice every time I work on a book or a story.
PADILLA: In 2005 you became a finalist for one of the most prestigious awards in the nation. How did it feel in a personal level to become a Pulitzer Prize Finalist?

URREA: It’s kind of funny, but one of my first thoughts was “I hope Tijuana is proud of me.” Although it sounds like faux modesty, this was one time that simply being a finalist was enough. It changed so much in my career. Though, of course, I invite them to go ahead and award me one next time!

PADILLA: In 2014 you gave a TEDx presentation in Alaska, where you spoke passionately about the dignity of Latin American children who come to the U.S. to seek refuge. What message would you give politicians whose decisions could help or hinder the lives of these children?

URREA: I am so much more angry now than I was for my TED talk. I don’t offer this as a cop-out to you, but I said it as clearly as I could in this new book. And we’ll see how people respond.
URREA: You know how on Cinco de Mayo there is a table in the front of the bookstore with a couple of “Latino books?” You know how when you go into Barnes and Nobel, there is a shelf for “Hispanic” or “Latino” books? It’s down at the bottom, somewhere beyond gay literature, Native American, or Asian literature. My hope is that we prevail, that we show this culture what we already know. “Latino” literature IS American literature. We know something about “America” and we can remind them that “America” goes from Tierra del Fuego to the Arctic Circle. We are not a cute seasonal beer ad. We are not a vector for do-gooders to feel good about themselves. We are true artists. We are geniuses. We are here to stay. I’d like to see all of us right there on the literature shelf. Let our books stand against Jonathan Franzen or Ann Patchett or Ernest Hemingway. Let us enact the dictum of St. James Brown: “I don’t need nobody to give me nothing. Just open the door. I’ll get it myself.”

PADILLA: Thank you again Luis Alberto for taking the time to share with us at Latino Book Review.

URREA: It’s been an honor. Thank you for taking the time. Much love and respect.
​
Optimonk subscribers