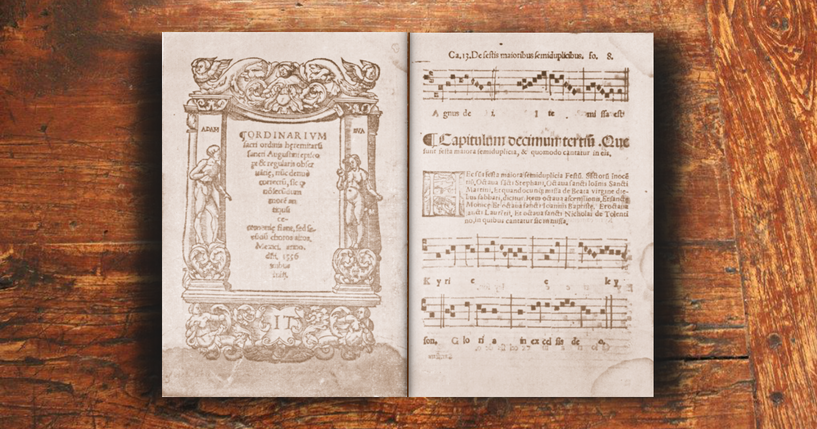 ​The first book with musical notation printed in the Americas is the Ordinarium, printed in Mexico City, Mexico in 1556 by Juan Pablos. The complete title of the Ordinarium, as it appears in the title page, is Ordinarium sacri ordinis heremitaru sancti Augustini episcopi & regularis observatie, nunc denuo correctu, sicqz no secudum more antiquu, ceremonie siant, sed secudu choros altos.

​More than 230 books had already been printed in Mexico before a permanent English colony had been established in what is now the United States, making it the only place in the Americas where a book with music notation was printed in the 16th century. Jamestown was founded in 1607, fifty-one years after the Oridnarium was printed. The Ordinarium was printed 142 years before the colonies of British America printed their first book with musical notation, The Bay of Psalms, in 1698. The Ordinarium is also the first book to show printed nude art in the Americas. A completely nude Adam and Eve are facing each other on the title page.

The Ordinarium is an instruction manual for Augustinian priests on the way that they should celebrate mass according to their tradition. After studying the Ordinarium during seminary school, the newly ordained priest would know the intonations for four parts of the mass: the Kyrie, Gloria, Sanctus and Agnus Dei. Augustinians loved music; St. Augustine is known for saying that, “He who sings prays twice.” The Ordinarium contains 80 pages and forty-nine chapters. Seven chapters indicate the chants that should be sung for Sunday mass and special occasions. The Ordinarium even instructs on: how and when to ring the church bells, when to face the altar, when to stand and when to sit, when to kneel while in choir and the proper tone for benedictions and absolutions.

Instead of using today’s traditional music notation and staff, the Ordinarium contains twenty-seven pages of plainchant written with neumatic notation. The notes are printed in black ink and the staff lines in red. Five staff lines were used instead of four. The do and fa clefs were both used. The do clef is placed on the fourth line and the fa clef on the third and sometimes on the fourth. The note heads used are square and diamond shaped and the neumes have Gregorian chant characteristics. None of the melodies for the chants date latter than the twelfth century.

The colophon of the Ordinarium is missing but a notarial record shows that Juan Pablos printed it. Only three copies of the Ordinarium are known to exist. One copy is at the New York Public Library, another at the British Museum and the third at the William H. Scheide Collection at Princeton, New Jersey.
Bibliography​
Optimonk subscribers