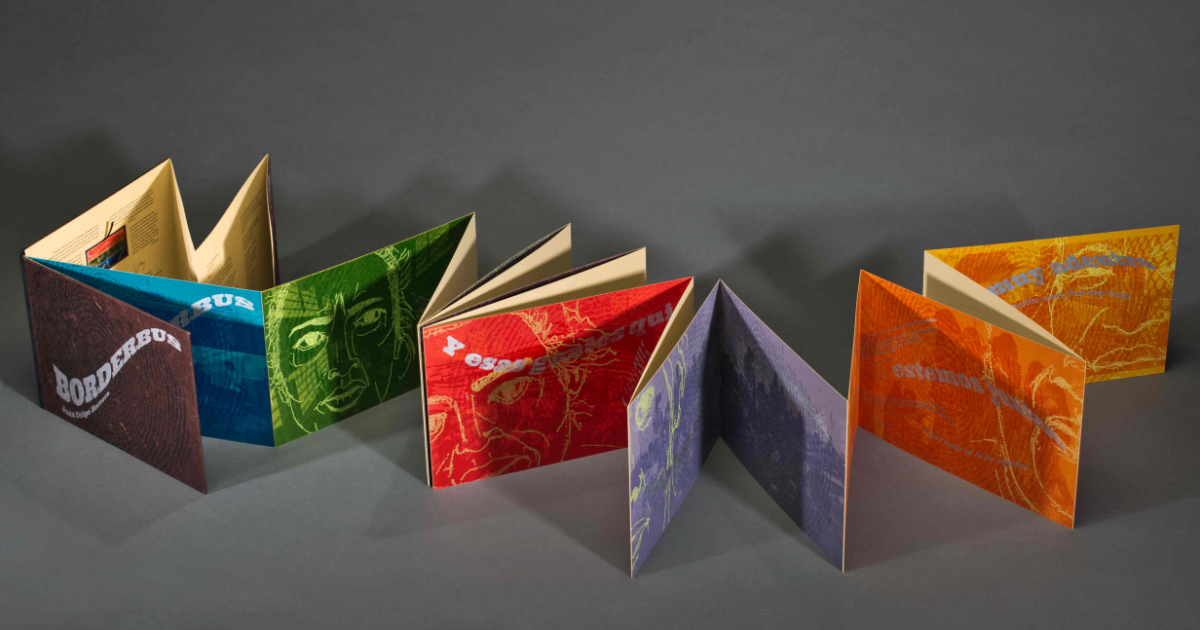 Borderbus began out of necessity, an urgent need to generate work that points to one of the most difficult issues of our time: the conditions experienced by refugees at our borders in the face of nationalistic extremism. It is the sixth book in the Literatura Chicanx/Latinx Series from Moving Parts Press which began in 1991. These works of contemporary Chicano/a/x artists and writers in translation are the result of a close collaboration between writer, artist, and book artist Felicia Rice. 10% of the proceeds from the sale of Borderbus goes to support humanitarian aid at the border.

​Borderbus is a rendering of one long poem by Juan Felipe Herrera. The poem takes place on a U.S. Department of Homeland Security Immigration and Customs Enforcement (ICE) bus. Two women have been detained while trying to cross the U.S.-Mexico border, and are being transported to a detention center. They speak in English and Spanish, whispering to avoid the attention of the guard. The text is embedded in prints by the artist/publisher and interpreted in audio recordings of the poem.
“No somos nada y venimos de la nada
pero esa nada lo es todo si la nutres de amor
por eso venceremos
We are nothing and we come from nothing
but that nothing is everything, if you feed it with love
that is why we will triumph
We are everything hermana
Because we come from everything.”
Felicia Rice’s relief prints layer saturated color fields, fingerprints, photographs, drawings, type, and reflective surfaces in a polychromatic sequence of eight page spreads. The silver ropes of type present the whispered conversation between the two women on the bus. Rice’s sketches of the women’s faces are drawn from videos documenting the journey from Central America to the United States, Maria en Tierra de Nadie by Marcela Zamora and De Nadie by Tin Dirdamal.

A usb drive included with BORDERBUS contains two audio versions of the poem, “Borderbus.” The first is a moving reading of the poem in two voices, by Marisol Baca and Gabriela D. Encinas, directed by Juan Felipe Herrera and recorded by Curtis Messer. The second is a recording of Herrera reading the poem.

Preview from VISIONARIES episode PBS
Juan Felipe Herrera is a poet, performer, writer, cartoonist, teacher, and activist. In 2011, Herrera was elected a Chancellor of the Academy of American Poets. Herrera was the 21st United States Poet Laureate from 2015 to 2017, the nation’s first Chicano/a poet laureate. Herrera’s experiences as the child of migrant farmers have strongly shaped his work. Community and art have always been part of what has driven Herrera, beginning in the mid-1970s, when he was director of the Centro Cultural de la Raza, an occupied water tank in Balboa Park that had been converted into an arts space for the community.
​
Felicia Rice is a book and performance artist, typographer and letterpress printer, printmaker, publisher, and educator. A student of the history of the book and printing, she also utilizes digital technology to produce limited edition artists books. Rice has collaborated with visual artists, performance artists, and writers under the Moving Parts Press imprint since 1977. Work from the Press has been included in exhibitions from New York to Mexico DF to Japan. Her books are held in library and museum collections worldwide and she has been the recipient of many awards and grants, from the NEA to the French Ministry of Culture.