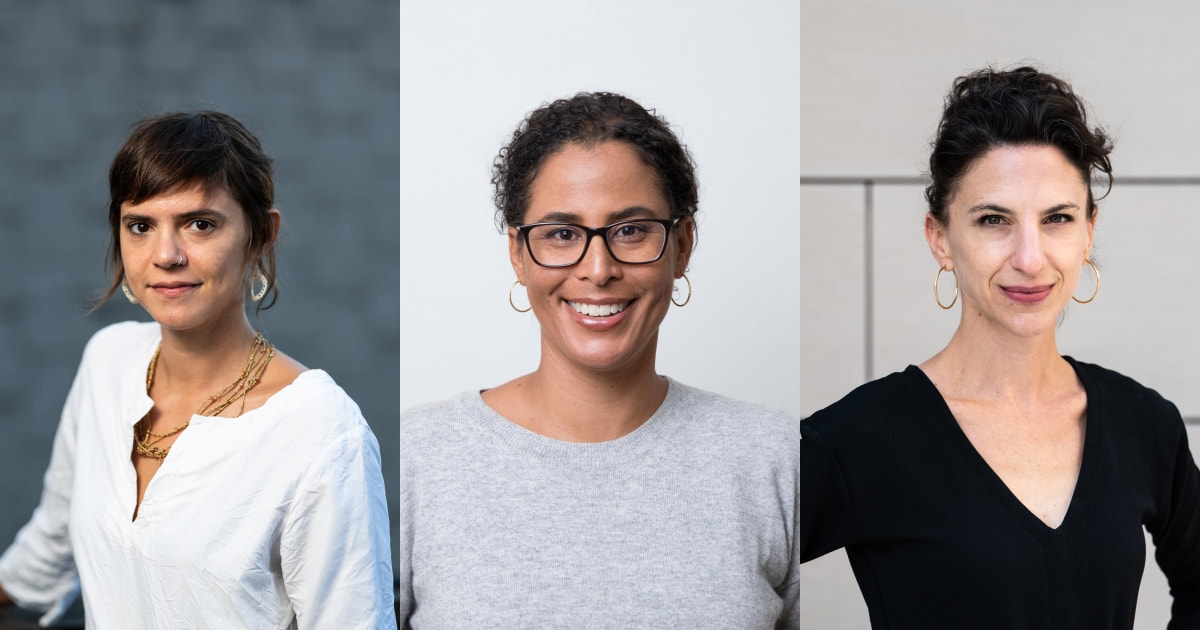 ​FROM MACFOUND.ORG
ABOUT VALERIA'S WORK
Valeria Luiselli is a writer of fiction, essays, and inventive hybrids of the two who challenges conventional notions of authorship and explores the experience of dislocation as a common theme across her many projects. Writing with dry humor and deftly controlled prose in both Spanish and English, she often wrestles with the complexity of translation and draws from an unusually broad range of Latin American, American, and European literary traditions.

Luiselli’s novel La historia de mis dientes (2014), translated into English as The Story of My Teeth (2015), chronicles the adventures of an auctioneer and teller of tall tales named Gustavo “Highway” Sánchez Sánchez while experimenting with alternative modes of literary production. The project originated as a commission from the art gallery of the Mexican juice corporation Grupo Jumex. Luiselli engaged the workers in the Jumex factory as collaborators in the writing process, sharing installments of the work in progress with them and incorporating their reactions into the novel’s chapters. Her most recent books synthesize the formal inventiveness of her earlier work with her experiences as a court interpreter for unaccompanied child migrants caught in the labyrinth of U.S. immigration policy. In the nonfiction work Tell Me How It Ends: An Essay in Forty Questions (2017), she demonstrates the impossibility of giving coherent, narrative form to the harrowing and fragmented statements that the immigration intake questionnaire elicits from children facing deportation. These stories, her attempts to document them, and the ethical dilemmas these efforts pose also figure prominently in her novel Lost Children Archive (2019). The novel is a fictionalized account of her own family’s road trip from New York to the U.S.-Mexico borderlands, with stories of the unfolding Central American migration crisis nested into the narrative through radio news reports, phone calls to a friend whose daughters are missing, and a novel-within-the-novel that the mother reads aloud about children making their way to an unnamed land. Rather than dividing the work into chapters, Luiselli organizes it around archival “boxes” of materials—audio recordings, texts, maps, and photographs—that her protagonists collect and reference throughout their journey.

As she forges new forms of writing that interweave multiple voices—those of other writers, readers, translators, and the children she interviews—Luiselli is posing profound questions about the various ways we piece together stories and pass them on to subsequent generations.
BIOGRAPHY
Valeria Luiselli received a BA (2008) in philosophy from the National Autonomous University of Mexico and a PhD (2015) in comparative literature from Columbia University. She was an assistant professor in the Romance Languages and Literatures Department at Hofstra University (2015–2018) and taught in City College of New York’s Beyond Identity Program (2017) prior to joining Bard College’s Program in Written Arts as a writer in residence in the fall of 2019. Luiselli is also the author of the essay collection Papeles Falsos (2010), translated into English as Sidewalks (2014), and the novel Los ingrávidos (2011), translated into English as Faces in the Crowd (2014). Her books have been translated into more than twenty languages and her work has appeared in such publications as the New York Times, Letras Libres, The New Yorker, El País, and Harper’s Magazine.
ABOUT KEYLLY'S WORK
Kelly Lytle Hernández is a historian challenging long-held beliefs about the origins, ideology, and systemic evolution of America’s modern-day incarceration and immigrant detention practices.

Her book, Migra! A History of the U.S. Border Patrol (2010), is the first significant academic history of the enforcement organization. Lytle Hernández traces the rise of the Patrol over the course of the twentieth century, from a rural community brigade with a narrow agenda to help farmers and ranchers manage the flow of seasonal workers in the 1920s to its current focus as an anti-immigration unit of the federal government. Her research took her to the Instituto Nacional de Migración (INM) in Mexico City, where she unearthed documentation about partnerships between the early Border Patrol and the Mexican state to regulate Mexican migration into the United States. Her second book, City of Inmates: Conquest, Rebellion and the Rise of Human Caging in Los Angeles, 1771–1965 (2017), is an ambitious study that reconstructs the history of how Los Angeles County built what is today the largest jail system in the United States. She builds upon what we know about the Southern enslavement of African Americans as the defining precursor to America’s racialized prison system by foregrounding how, in the American West, cultural and institutional practices targeted African Americans as well as other marginalized groups. Native populations, non-white immigrants, and even itinerant and impoverished white men encountered hyper-policing, incarceration, and eventually erasure from social privileges and the public eye. Because historical records from the L.A. County Jail and Sheriff’s Office had been destroyed, Lytle Hernández built what she calls a “rebel archive” containing materials from local agencies—including public health services, the courts, and city council—and from activists, community members, and incarcerated persons.
​
While making previously unarchived records from both sides of the U.S.-Mexico border accessible to other scholars, Lytle Hernández is uncovering experiences and perspectives that shed new light on the carceral state’s complex and entangled roots in the western United States. She currently leads the Million Dollar Hoods research project, which maps the fiscal and human costs of incarceration in Los Angeles County. She is also at work on a history of the Flores Magón brothers, Mexican social reform activists who, as exiles in the United States, seeded the outbreak of the 1910 Mexican Revolution. Lytle Hernández’s investigation of the intersecting histories of race, mass incarceration, immigration, and cross-border politics is deepening our understanding of how imprisonment has been used as a mechanism for social control in the United States.
BIOGRAPHY
Kelly Lytle Hernández received a BA (1996) from the University of California, San Diego, and a PhD (2002) from the University of California, Los Angeles, where she is currently a professor in the Departments of History, African American Studies, and Urban Planning and director of the Ralph J. Bunche Center for African American Studies. She is the author of Mexican Immigration to the United States, 1900–1999: A Sourcebook for Teachers (2002), and her writing has appeared in Pacific Historical Review, Boom: A Journal of California, and Aztlán: A Journal of Chicano Studies, among other journals.
ABOUT VANESSA'S WORK
Vanessa Ruta is a neuroscientist tackling one of the fundamental questions of neuroscience: how the brain processes sensory information and generates behavioral responses. Animal behavior consists of the interplay of innate (or instinctual) and learned behaviors that arise from sensory experience. Ruta draws on a breadth of scientific training, spanning molecular biophysics to systems neuroscience, and uses the model system of Drosophila (fruit fly) to glean cross-disciplinary insights that advance the science of innate and learned behaviors.

Her facility with and imaginative deployment of sophisticated techniques such as optical labeling, intracellular electrophysiology, and chemical imaging have allowed her to visualize and probe neural circuits, including the function of individual synapses within the brain of an awake, behaving fly responding to stimulus from the physical world. By mapping a pheromone sensing circuit, one synaptic link at a time, from the sensory input to behavioral output during Drosophila courtship, Ruta has discovered key divergence points in sensory processing pathways in male and female brains, indicating a mechanism by which the same pheromone input is processed in a gender-specific manner to elicit the unique behaviors of male and female flies. She then traced how the male fly reacts to receiving both positive and negative mating sensory cues simultaneously. Ruta and her lab expanded on this work in investigations of how the fly’s internal state, learning, and experience interact with sensory information in the Drosophila mushroom body, a key region of the brain for associative learning.
​
Recently, using cryo-electron microscopy, Ruta and colleagues elucidated the protein structure of an insect odorant receptor and presented the first structural understanding of how the chemical world is detected. In another line of work, they developed genetic reagents to directly compare the same pheromone processing neural pathways in recently diverged Drosophila species, providing explicit insight into how evolution shapes neural circuits to generate species-specific mate preferences. Through her multidisciplinary approach and unique understanding of the correlation among anatomy, synaptic activity, and behavior, Ruta is shedding light on how sensory stimuli can elicit profoundly different behavioral responses as a result of neural circuits being modified through evolution or individual experience.
BIOGRAPHY
Vanessa Ruta received a BA (2000) from Hunter College of the City University of New York and a PhD (2005) from The Rockefeller University. She was a postdoctoral researcher (2005–2010) and an associate research scientist (2010–2011) at Columbia University before returning to The Rockefeller University in 2011, where she is currently the Gabrielle H. Reem and Herbert J. Kayden Associate Professor heading the Laboratory of Neurophysiology and Behavior. Her work has been published in such scientific journals as Cell, Nature, and Neuron, among others.
​
Optimonk subscribers